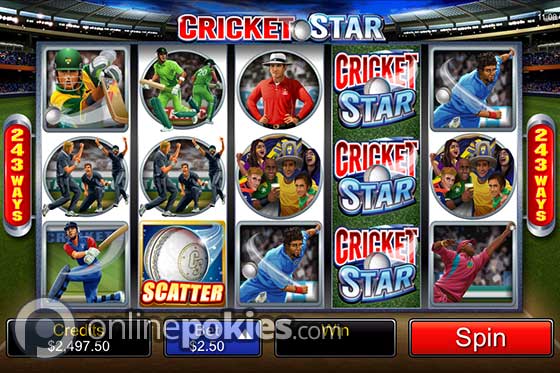 Cricket may well be even more popular than pokies in Australia so it's about time that a pokie game with a cricket theme was released. Microgaming have timed the games release to coincide with the 2015 ICC Cricket World Cup.

Like most 243 ways games you don't have to bet on each individual way. Instead a 50 credit bet covers all possible ways with the minimum bet being 50c. You can bet up to 10 credits per way and up to $250 per spin.

Cricket Star feature Rolling Reels which is a cascade feature that triggers on every winning spin. All winning symbols are removed from the screen and new symbols drop into place. This continues until no win is on the screen and can mean you get a lot of wins on a single paid spin.

The Cricket Star logos are wild and substitute for everything but the Cricket Balls. The wilds only appear on reels 3, 4 and 5 but they are in big stacks which can means a lot of big wins and cascades if you start with the lower end of the stack.

Getting 3, 4 or 5 of the scattered Cricket Ball symbols awards 15, 20 or 25 free games. During the free spins the Rolling Reels become even more important because each cascade increases the win multiplier up to X10.