Fisticuffs is a 10 line Net Entertainment online pokie with both ways pays and a unique boxing feature that adds wilds to the reels and gives you one re-spin where you get stacked wilds on the first and last reels. 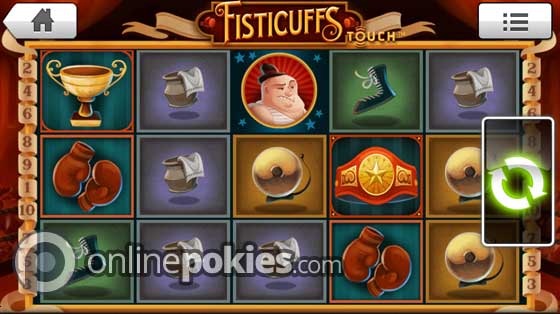 Fisticuffs is a boxing theme pokie game developed by Net Entertainment that features a boxing feature and re-spins where you get stacked wilds on reels 1 and 5 that can result in jackpots as high as 100,000 credits.

It's not the first time we've seen a pokie with a boxing theme with Aristocrats Prize Fight pokie being a very popular high denomination game in Australian pubs, clubs and casinos for well over a decade.

While Fisticuffs is a 10 line pokie the minimum bet is actually 20 credits per spin as you pay for both left to right and right to left lines. Credit levels start at 1c and go up from there and you can also choose to bet up to 10 credits per line.

Fisticuffs has three different wild symbols which each appear on either reel 2, 3 or 4. Each of the wilds is a Boxer and getting multiple wilds on the screen is the key to winning the boxing feature and the re-spins.

Getting wild symbols on adjacent symbol positions activates the boxing feature. The boxers punch each other creating the possibility of a row of up to five wild symbols or groups of wilds. Every time that the boxers duke it out you are awarded one re-spin.

On the re-spin the positions that the boxers appeared on are held and stacks of wild symbols are added to the first and last reels. This gives you the possibility of getting five wilds on multiple lines for some big wins.