Fooball Star is a 243 Ways pokie game released by Microgaming just in time for the 2014 FIFA World Cup in Brazil. The game has Rolling Reels as well as free spins and a randomly triggered Striking Wild feature. 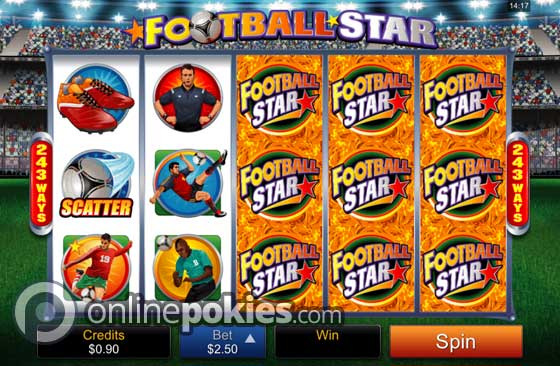 With the 2014 FIFA World Cup about to start in Brazil, Microgaming have released a football theme pokie that should be popular with both fans and non fans of the round ball game. It has a range of features and a big 1,050,000 credit jackpot.

A 50 credit bet covers all 243 ways and credit levels start at 1c. You can select to bet up to 10 credits per way and you can also choose from credit levels going right up to 50c which makes for a $250 maximum bet.

The Football Star logos are the wilds and appear in stacks of 40 symbols on the last three reels only. This combined with the Rolling Reels feature means you can get multiple wins with stacks of wilds.

Football Stars has a Rolling Reels feature where any winning combination is paid and then any winnings symbols are removed from the screen and new symbols drop down. The feature can lead to lots of winnings spins for a single paid spin.

At any time during the regular spins the Wild Strike feature can be triggered and makes either reel 2, 3, or 4 wild. A win is guaranteed whenever the feature is triggered and this feature gives you the chance to get four wild reels and the pays for the first three symbols 81 times each.

Get two, three or four Football scatters anywhere on the screen and you win 15, 20 or 25 free games with increasing multipliers. The way the multipliers work is that they increase for each cascade of the Rolling Reels. You start with no multiplier and then each cascade awards X2, X3, X4, X5 and X10.

Clearly to get the biggest wins you need to reach the X10 multiplier which in our experience did not happen too frequently. The free games cannot be re-triggered which is a bit of a negative.