Hitman is a Microgaming pokie based on the popular Hitman video games published by Eidos Interactive. The game features expanding wild symbols, an assassination bonus, free spins and an 800,000 credit top prize. 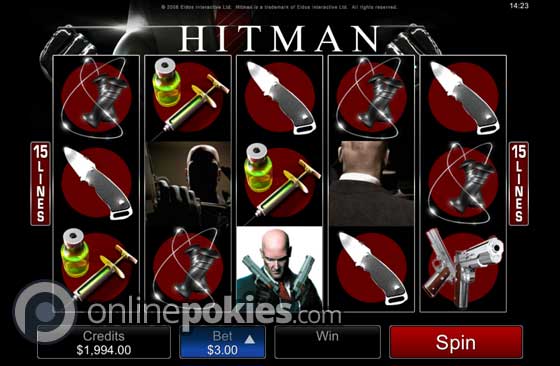 Hitman is a 15 line pokie game based on the rather dark theme from the Hitman video games - assassinations. It's clearly not a theme for everyone but the game does offer some big winning chances and a range of features.

The White Hitman symbols are wild and appear on the middle three reels only and substitute for everything but the scattered 18+ symbols, the Bonus symbols and the Insignia symbols.

The wilds expand to take up the whole reel so you can get all three middle reels wild for some big pays. For example you can get the same jackpot on up to five lines in a single spin which during regular play can pay as much as 400,000 credits.

Get a Hitman Insignia logo anywhere on reels 1, 2 and 3 and you win the Insignia feature. Pick one Insignia to win up to 6,000 credits.

Get three or more of the scattered 18+ logos and you win 18 free spins with all wins doubled. The free games cannot be re-triggered which is a bit of a disappointment although the expanding wild symbols are available on the free games which gives a top jackpot of 800,000 credits.

The Contract Bonus offers jackpots as high as 270,000 credits and is won by getting three of the green Bonus symbols anywhere on reels 3, 4 and 5. Once won you move to a screen where you select a target that then awards a credit prize.

Each target has a different minimum and maximum award so it's a bit of a gamble which to go for. Once you have selected a target you choose a weapon and then move to the final stage where a multiplier of between X2 and X6 is awarded.