Mermaids Millions is a 15 line online pokie game from Microgaming that has an aquatic theme, a treasure bonus stage, free spins with tripled wins and a top jackpot of 225,000 credits. 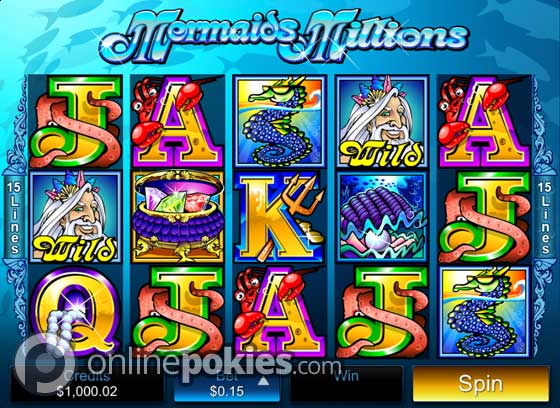 Mermaids Millions is a 15 line pokie that has a relaxing aquatic theme with free spins and a bonus feature. Other than the graphics and sounds the game is identical to the Tomb Raider pokie in terms of gameplay.

Play Mermaids Millions for as little as 15 cents or as much as $75 per spin. You can choose to bet between 1 and 5 credits per line with all wins multiplied by the amount of credits bet per line.

Get three or more of the scattered Mermaid symbols anywhere on the screen and you win 10 free spins with all wins tripled. This increases the top jackpot to 112,500 credits. The feature can be won again on the feature.

With three the biggest win is 1,500 credits, with four this grows to 2,000 and with five you can win up to 2,500 credits. The Treasure Feature can be won during regular play and on the free games.