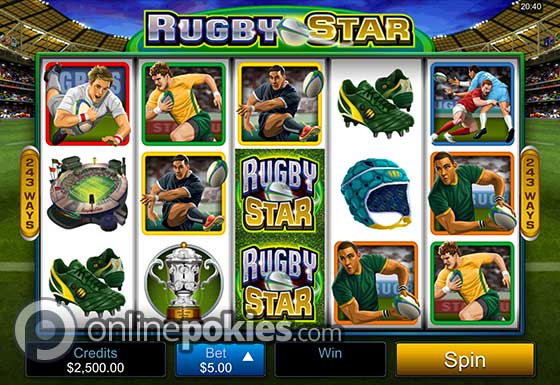 Rugby Star is a 243 ways based on the popular game of rugby (Union not League) that was released to coincide with the 2015 Ruby World Cup being held in England. The game has several features, a big 1,200,000 jackpot and the theme should be popular in Australia and New Zealand.

A 50 cent bet covers all of the 243 ways at the lowest possible cost per spin. You can bet up to 10 credits per line and select credit levels of up to 50 cents which gives you a $250 maximum bet.

Rugby Star features Microgaming's Rolling Reels feature which means you can get a lot of action for one paid spin. Any winning combinations are paid and then removed from he screen and new symbols drop into place which can then keep paying wins.

The Rugby Star logo is wild for everything except the scatters and 40 wilds appear stacked on reels 3, 4 and 5. Obviously you can't get five wilds but getting a few stacks combined with the Rolling Reels can lead to some impressive scores.

At any time during regular play the Will Pass feature can be won and offers a guaranteed winning spin. Up to two reels can turn wild on reels 2, 3 or 4 making it possible to have four wild reels if you get wilds on the last reel.

Catch 3, 4 or 5 of the Football scatters and you win 15, 20 or 25 free games. During the free spins the Rolling Reels feature increases the multiplier up to X10 on each consecutive win cascade.