Thunderstruck was released in 2004 and was the first real Australian style pokie game to be released online. The game features free spins with all wins tripled, a gamble option and a top jackpot of 150,000 credits. 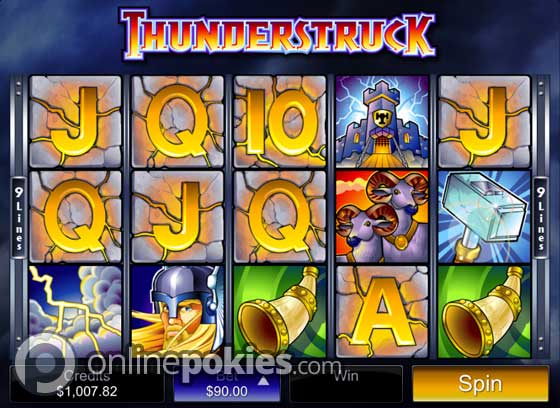 Up until 2004 there were no real Australian style pokies available online. This all changed with the release of Thunderstruck which became and instant hit with online players and changed the landscape of online gambling forever.

Thunderstruck features a Nordic theme with Thor as the wild, nine pay lines, a free spin feature that is the same as the one on Queen of the Nile and and Australian style gamble option where you can pick the colours or the suits.

Thunderstruck is a game for all budgets as you can be spinning for as little as 9c or as much as $90. Credit sizes range from 1c to $2 and you can choose to play between 1 and 5 credits per pay line.

Clearly inspired by Queen of the Nile, the feature on Thunderstruck is 15 free spins with all wins tripled and is won by getting three or more of the scattered Rams. The feature can be won again on the feature and the jackpot for the five Thor wilds grows to 150,000 credits.

You can try increasing your winnings with the Australian style game feature. Pick the colours for a X2 win or the suits for a X4 win.