Big Bang is a 25 line pokie game based on the scientific theory of how our universe developed. The game has a win multiplier feature where wins can be multiplied by up to X32 and as high as 268,032 credits. 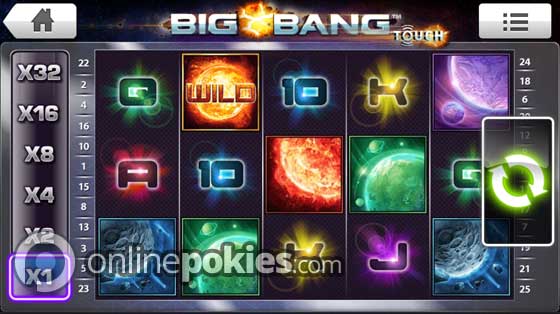 Big Bang is a Net Entertainment pokie game with an outer space theme based on the idea that the universe started with a very big bang and is still expanding. The game has a multiplier feature although it does lack any type of free spins which is quite rare for a poker machine these days.

You can choose from credit levels starting at one cent and going up to fifty cents. Minimum bet for all lines is 25 cents and the max possible bet is $50 per game. Of course there are lots of options in between these two levels.

The wild symbol substitutes for all symbols on the reels. There is no specific pay for five wilds so getting five on a line awards the next highest jackpot of 4000 credits at the lowest X1 multiplier level or 128,000 at the highest X32 level.

The only feature that Big Bang has is the multiplier feature. The way this works is that each consecutive win increases the multiplier by one level. A losing spin resets the multiplier to the starting level of X1. The levels are X1, X2, X4, X8, X16 and X32.

If you reach the highest X32 level any consecutive winning spins are all then paid at the highest multiplier which can result in some big pays.

On most pokies you have to get the free games to access the big multipliers but on Big Bang you just need a series of consecutive wins. It's an interesting idea and is one of those features that you have to try out to see if it's the sort of game for you.