Aliens is a 15 line Net Entertainment online pokie based on the 1986 Aliens film directed by James Cameron. It features a unique style of game play with three stages - The Search, The Encounter and The Hive. 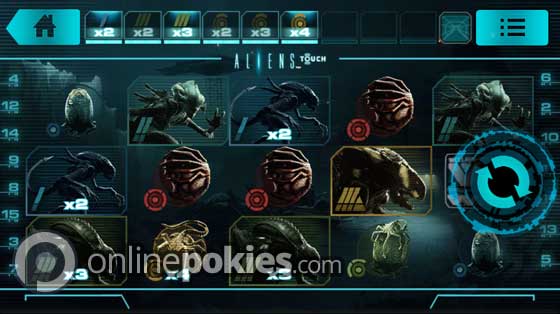 Aliens is one of the few movie sequels that may in fact be better than the original. Now Net Entertainment have released the first officially licensed Aliens online pokie game where you can win up to 570,000 credits.

The game features 15 lines and three distinct stages where your aim is to reach the Hive and destroy the Queen.

The Weyland-Yutani Corp symbol is wild for all symbols and can appear on reels 2, 3, 4 and 5 during The Search and randomly on any reel during The Encounter (Excluding the Ammo Clip reel).

The base game spins are known as The Search and are the first of the three levels. Each win on the base game adds icons to the Alien Activity Meter on top of the reels. A non winning spin removes one icon from the meter and completing the meter moves you on to the next stage.

Each win for a symbol type awards a multiplier based on the amount of symbols. These multipliers increase your wins on the second stage so the more multipliers you collect the bigger the possible wins on the next stage.

The Encounter is the free spin feature on Aliens and is different from any free spins we've seen before. You start each spin with three symbols on the middle line and these symbols go from the lowest paying symbols on the first spin to the highest on the last spin.

Any multipliers from the previous stage multiply any wins for the corresponding symbols during the free games. Instead of getting a set amount of spins you have to survive each round to get to the next spin.

At the start of the feature you get 1 Ammo Clip and at the end of each spin the Ammo reel spins and can award up to 2 extra Ammo clips. As long as you have ammunition your free spins continue. Run out of Ammo however and it's "Game over man!".

Complete the Encounter and you move to the final stage - The Hive. Here you start off with 4 Ammo clips which gives you 5 re-spins. Each spin awards grenade strength and a multiplier and you then attack the Queen.

There are four wins displayed for the final level with the result determined by how far you progress. It is possible to destroy the Hive with a single grenade which awards the biggest jackpots for the bonus feature.