Game of Thrones is a Microgaming online pokie based on the hit TV series and novels. The game comes in two line formats, features four types of free spins, a gamble option and jackpots that go as high as 6,050,000. 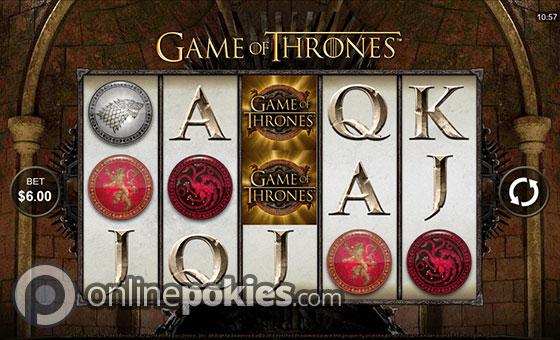 The Game of Thrones pokie is based on the novels by George R. R. Martin and HBO television series which are set in the fictional Seven Kingdoms of Westeros where noble families fight for control of the Iron Throne.

The game is officially licensed from HBO but fans of the show might be a little disappointed with the fact that there are no characters from the show on the reels. It's a little odd considering other branded games like The Dark Knight and Jurassic Park feature scenes from the films.

The Game of Thrones logos are wild for all symbols except the scatters and appear stacked on all reels. This means you can get big wins on multiple lines or ways on a single spin. It also gives you the possibility of a whole screen of wilds and the top jackpot on all lines or ways.

The Iron Throne symbol is the scatter and pays for at least two in any position. Instead of getting a fixed prize for two you get a random cash prize every time two are on the screen. This prize can be anywhere from 1x to 100x your bet.

To win the feature on Game of Thrones you need to get three or more of the Iron Throne symbols anywhere on the screen. You then get to select from four different features based on the houses from the series. Each option gives you a set amount of free spins, a multiplier and a special stacked symbol.

All of the features can be re-triggered with three or more scatters while on the free games. We like having the chance to choose from a variety of free game options and this is similar to the choices you have on games like 5 Dragons and Lucky 88.

Game of Thrones also has a gamble feature which has four possible stages. Rather than the normal red / black and suits the gamble option is a coin flip where you pick heads or tails. Pick correctly and you travel along the map up to four times.