Frankenstein is a 20 line pokie game based on the classic story of Dr. Frankenstein and his monster. The game features Linked Wilds and free spins where you can collect multipliers as high as X5. 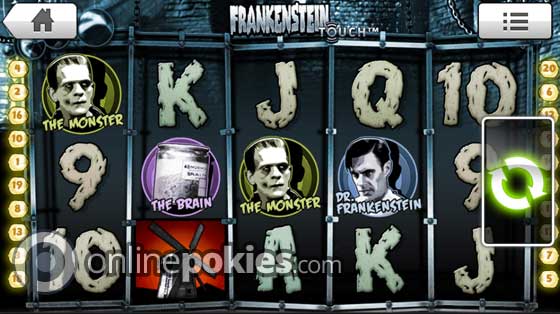 The story of Frankenstein dates back to 1818 when Mary Shelley and Bernie Wrightson published the original Frankenstein book. Since then it has been made in to several motion pictures and now Net Entertainment have released a pokie based on the classic story.

The game features 20 pay lines with linked Lightning Wilds during regular play and linked Fire Wilds during the free spins. The highest possible jackpot in a single spin is a big 175,000 credits.

You can play Frankenstein for as little as 20 cents a spin or as much as $100 per game with lots of different levels in between.

During the regular spins the Lightning wild symbols appear on the middle three reels only. When ever a wild symbol appears on the screen it will spread to at least two adjacent symbol positions. Get all three on the screen and you're pretty much guaranteed a big win.

The Burning Mill symbols are scattered and getting three or more anywhere on the screen gives you 10 free spins. During the free games you are guaranteed to get one Fire Wild on the screen for every spin.

The fire wilds works in the same way as the Lightning wilds and spread to at least two symbol positions and up to four if you're really lucky.

You start the free spins with a X1 multiplier and can collect multipliers on the last reel which can give you multipliers as high as X5. Getting two Burning Mill scatters during the free games gives you five extra games and getting three gives you another 10 free games.