Tornado : Farm Escape is a 20 line Net Ent pokie game with a comical twist on one of natures most destructive forces. The game features a unique style of free games and a special Storm Bonus where you can get a lot of wilds. 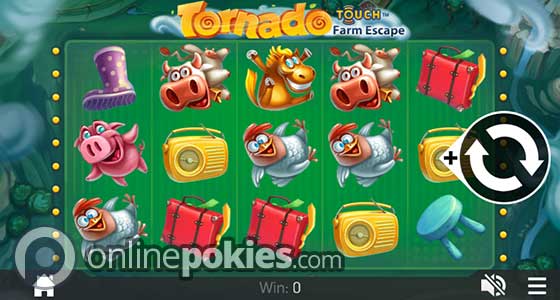 Tornado : Farm Escape is a pokie game with two features that are based on what happens when a big storm hits. The Farm Escape part of the theme introduces a range of farm animals who use a tornado to escape their whip cracking farmer and usual busy days of work.

We're lucky here in Australia that tornado's are almost unheard of but that's not the case in the USA where they can cause mass destruction when they touch down. In our opinion it's slightly odd to have a comical theme based on something that in reality is anything but funny.

There are a good range of betting limits on the Tornado pokie with the lowest bet being 20 cents and the highest being $200. There are lots of levels between these two as you have the options of a range of credit sizes and the choice of betting between 1 and 10 credits per line.

The TV symbols is the wild and substitutes for everything except the scattered Hot and Cold Cloud symbols.

The Storm Bonus is a random feature that can be won at the start of any paid spin. Before the reels come to a stop the storm cloud moves onto the screen and adds a wild symbol. It can then move to another position and keep adding wilds up to a total of 15.

During the free spins there are no line wins. Instead you win credits by collecting the special symbol and wilds that where selected when you won the feature. The free games continue as long as one symbol or wild is collected.

The pays on the free games are based on the symbol selected and the amount of symbols collected. The more you collect the bigger the wins get.